THE CHAIR FROM CLEOPATRA TO LOUIS XIV Antiquity Of all the ancient civilisations, Egypt has left behind the richest legacy as regards... 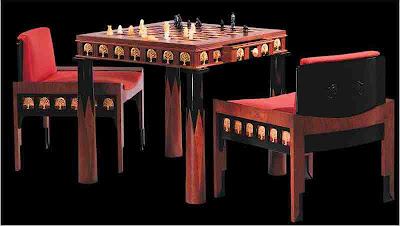 THE CHAIR FROM CLEOPATRA TO LOUIS XIV

Of all the ancient civilisations, Egypt has left behind the richest legacy as regards the chair. Those found in the Nile Valley were in an excellent state of preservation.. The Egyptian chair, already very comfortable, reached its peak around 1500 BC. Made in several pieces, these chairs had very simple lines. The base is made from strips of leather, fastened to an encircling frame; on this base, presumably, would be placed a linen cushion woven from the flax that was grown in Egypt. There are various models : folding chairs, Antique wooden stools, straight chairs, thrones chairs , armchairs and antique beds with headboards. These chairs are made from several types of wood, including cedar and ebony, and are decorated with inlays of ivory or with gilding.

The chairs of other civilisations, not so well-preserved, are illustrated in bas-reliefs, paintings of various kinds, including frescoes, and on pottery or other ceramics which allow reconstructions to be carried out. Antiquity has always been an inexhaustible source of inspiration in the two thousand years that followed.