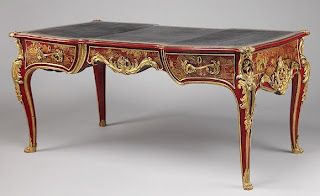 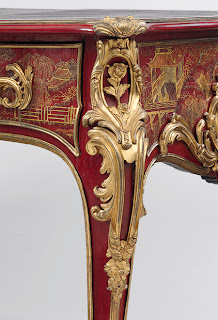 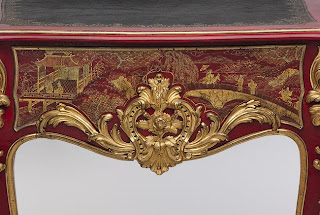 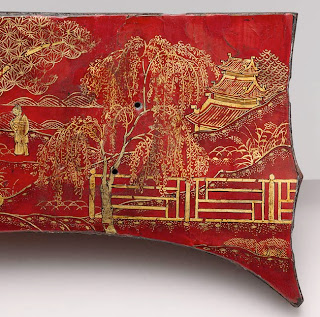 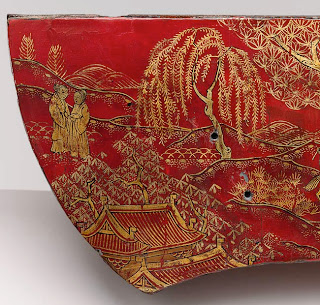 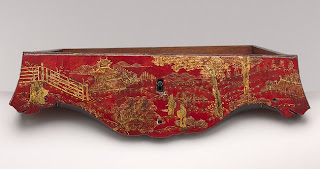 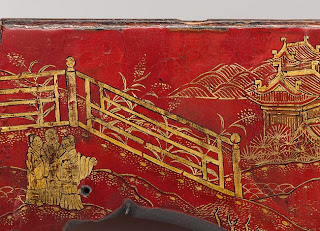 
This writing table was delivered by Gilles Joubert on December 29, 1759 to the cabinet intérieur of King Louis XV at Versailles. This room, which served as a study, was part of the king's private apartment at the palace. The desk is veneered with European japanning, a varnish made in imitation of Asian and, in this case, Chinese red and gold lacquer.

A prolific craftsman, Gilles Joubert was the leading supplier of furniture to the French royal household of Louis XV for over twenty-five years, delivering over four thousand pieces ranging from simple bidets to richly ornamented desks and tables. He began supplying furniture to the royal Garde-Meuble in 1748, but it was not until he was seventy-four years old that he was given the title of ébéniste du roi (Cabinetmaker to the King).

The volume of Joubert's commissions was so great that he often subcontracted work to other ébénistes in order to keep up with demand. Between 1763 and 1773, he was especially busy delivering about 2200 pieces for use at court, including forty-four writing desks, more than five hundred commodes, over a thousand small tables, and five hundred bidets.

Much of Joubert's furniture was produced before the guild made it mandatory for makers to stamp their furniture, while most of his later work was produced for the court and therefore was exempt from this rule. As a result, scholars must identify his pieces mainly from the detailed descriptions in the inventory of the royal archives.